Understanding the autonomic system is a powerful healing tool. The autonomic nervous system controls every function in the body. In the most recent Art of Healing Podcast, we discuss what is blood pressure.

What is the autonomic nervous system?

Understanding the nervous system helps you understand your body.

Within all of us, there is a system the controls heart rate, respiration, digestion, waste elimination, and sexual function. This same system influences our moods, and can control how we feel moment to moment.

The Autonomic Nervous System deeply impacts our experience in reality. Understanding this system will give you the keys to healing your mind and body.

What is the Autonomic System?

The Autonomic Nervous System controls the bodily functions that are not under conscious control This sounds deceptively simple. Respiration, circulation, digestion, immunity and reproduction all most be coordinated in order for the body to function in a healthy way. This must be balanced against the bodies need to move in order to acquire energy, expend energy or escape a threat.

In general, these systems oppose each other. One is always active, and only decreases it’s activity if the opposing system generates more signals.

There are times in which the body needs to rest and recover, such as after meals, when it’s time to sleep, or simply relax.  There is no significant demand on the body to exert energy for survival.

This mode of operation is when the parasympathetic system is dominant.  This system will influence the body to slow down the heart rate, increase digestive activity, and overall create a feeling of being relaxed.  This is the feeling we all have relaxing in our favorite chair reading a book for example.

The Parasympathetic Nervous System allows the mind and body to rest, digest and recover. When the body can slow down, the digestive system is able to absorb nutrients and eliminate waste effectively. The reproductive system can operate naturally, allowing for a natural libido that will ensure healthy sexual drive. The cardiovascular system, through the parasympathetic nervous system, will direct blood flow to the organ to ensure the normal bodily functions can perform at their best. 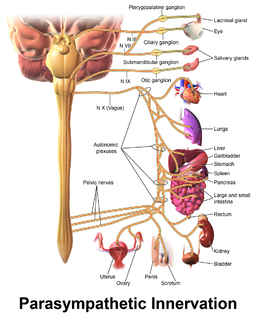 Function of the Parasympathetic Nervous System

Rest and recovery are necessary, but there are times in which we need to be active and kinetic.  We need to be alert, aware, and reflexes need to be at their peak.  When driving in heavy traffic, for example, the body needs to be able to react quickly to avoid a car accident.  Blood flow needs to be directed to the extremities to augment fast action if needed.  The heart should pick up speed in anticipation of a possible threat.  The pupils will dilate to improve vision.  This is when the sympathetic part of the sympathetic nervous system will dominate.

The Sympathetic Nervous System controls blood flow, reflexes, and temperature of the limbs.  Reflexes are an important survival tool for the living body.

The Sympathetic Nervous system is activated in times of exercise but also in stress. The design of the sympathetic nervous system operates with speed, and does not require the input of the brain. This system is able to activate the adrenal glands in times of crisis. The “fight or flight” reaction is when some sort of stimuli that creates fear engages the Sympathetic Nervous system, which will cause the release of adrenaline from the adrenal glands. This powerful reaction can be life saving in times of trauma. It is a very necessary system for survival.

Function of the Sympathetic Nervous System

What does the Autonomic System Control?

The organs of the chest and abdomen are controlled by both the Sympathetic and Parasympathetic nervous systems.

We often don’t realize our body must be able to respond to external stimuli rapidly. If there’s a threat heading our way, our brain may take several minutes to process the threat. Fortunately, we have intelligent bodies that can take over the process of running, hiding, or fighting. For this reason, the sympathetic nervous system, which governs the body’s ability to respond to external threats rapidly, does not need to communicate much with the brain.

The parasympathetic nervous system governs the body’s ability to digest food, have sexual intercourse, and eliminate waste, as well as influences the cardiovascular system to slow down. From this description we can tell that the parasympathetic system is best to run the body system in times of rest, relaxation or recovery.

Why Understand the Autonomic Nervous System?

I have the blessing of working with individuals with their bodies on a daily basis. Reflecting on this topic has reminded me of the true, miraculous nature of the human body.

The Chakra System, knowledge imparted from the ancient healing system of Ayurveda can be demystified by analysis of the Autonomic System.

It is for this reason I am embarking on my next project with my heart and soul. This project will journey even deeper into demystifying the mind-body connection by understanding the Heart Chakra.

Stay tuned for next week in this series in which we will discuss more in depth be sympathetic any parasympathetic nervous systems.

The next few months at Healing Arts will be full of exciting content.

Sign up for updates, and to catch the latest Art of Healing Podcast

4 thoughts on “What is the Autonomic Nervous System?”